When Life was Simple

When Life was Simple and the Pleasures of Life Appreciated 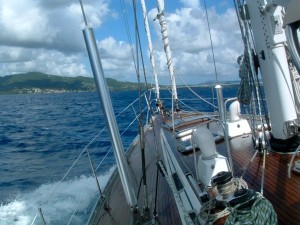 I often recall the days when I lived on a sailboat with my three young daughters and husband.  We spent two years sailing in the Caribbean and Mediterranean.  This is not a travelogue, but instead a view on simplicity.  We lived with little.  The space confined our belongings to just a few favorite clothes, shoes, toys, pots and pans – just the essentials.  Reflecting back, although not gourmet, I cooked meals with what I could find in the stores, adapting almost every recipe because it was impossible to find every ingredient needed.  Dinners were put together with one casserole dish and two saucepans.  Whether it be chicken curry, stir-fry or spaghetti, that was all I needed.  Coffee was made in  the morning by pouring hot water through a filter and that coffee was probably the best coffee I have ever enjoyed as we sat above deck with beautiful views and planned the day ahead.
My wardrobe was equally simple.  T-shirts, shorts, a few pairs of pants, a skirt or two, a pair of sneakers and two pairs of flip flops, one a little fancier for evenings out. That was it, and that was all that was needed other than the serious raingear and yachting essentials.  Life was simple and the world around us was admired and appreciated.  Time spent with one another was a blessing.

Imagination was in full force.  The kids made up games.  They created game boards with shells that moved around the board and met with all sorts of calamities and surprises.  It was their version of chutes and ladders.  They created people out of latex gloves filled with water and I remember an alter scene which was comprised of a wicker basket, watch and small stuffed animal.

Upon return to the U.S., I tried to keep these “simple” lessons with me.  Multiple sports, lessons and after-school activities were replaced with time for playing games, taking walks together with our new dog, and just enjoying eachother’s company.  So much of what we hear now is about the importance of having dinners together, but that is just an event chosen to bring the family together in the same place at the same time.  It’s not about the eating, but about slowing down.  If we were to simplify our lives, would we have more time to enjoy the people that matter most?

GET ORGANIZED MONTH Stick to the task at hand

10 Tips for staying healthy at home